When I started at DataStax 11 months ago, I was a total Cassandra newb. Sure, I'd been writing code for a number of years (with most of the last 10 years spent in the world of .NET), but the applications I was building were typically built using a RDBMS for storage. At most of the .NET shops where I worked, this meant SQL Server, but at my last job we were purveyors of the unholy alliance of technology vendors, Oracle and .NET.

As a way to get up to speed, my boss suggested writing a demo web application using Cassandra and C#. He already had a sample CQL schema for a video sharing web site (like YouTube) that I could use as a starting point. He'd been using this schema in some of his talks (both publicly and privately in front of customers) to illustrate some of the ways data modeling was done in Cassandra.

And thus, KillrVideo was born.

KillrVideo is a demo video sharing application built with Cassandra, C#, and Azure. Users can upload videos (or share videos from other sources like YouTube), watch them, comment on them, rate them, and more. All the code is open source and available on GitHub under an Apache 2 license. My hope is that other .NET developers, whether completely new to Cassandra or not, can use the schema and code available there as a reference for figuring out how you build a .NET application or service on Cassandra.

So what exactly is this thing built on? Here's a quick rundown of some of the components at the time of writing:

Wait, I thought you said Azure?

One of the goals of putting this demo application together was to ultimately host it live in Azure with a real Cassandra cluster. Fortunately, my boss already owned the domain name and so a live demo is available, deployed in Azure. As a result, the code contains an Azure deployment project and developers can use the Azure SDK for running the demo locally on the SDK's emulator. One minor difference between the live demo and the way most developers will run the code locally is that the live demo is running against a DataStax Enterprise cluster hosted in Azure.

I also wanted to support user-generated videos (i.e. uploaded videos) as part of the application. After all, the demo would probably be a little underwhelming if all you could do was share videos already uploaded to YouTube. Fortunately, Microsoft offers Azure Media Services as part of their platform for just this scenario. Initially, Media Services was the only piece of Azure that the site relied on, but over time it has evolved and it currently makes use of the following Azure services:

It also makes use of Nimbus, a great abstraction for working with Azure Service Bus that will be familiar to any developer who's ever worked with any of the popular .NET service bus libraries (like NServiceBus, MassTransit, or Rebus).

Disclaimer: I am fascinated with software architecture, but I am by no means an expert.

When I first started writing the demo, I made a decision that a lot of developers make--that the fastest and easiest way to get a prototype working was to build a mostly monolithic app with a traditional three-tier achitecture. I even spoke about this and included a slide with a diagram when I presented at the Cassandra Summit 2014 in San Francisco. Over time though, my goal was always to move things towards more of a modular architecture.

In the last few months, I got that opportunity as part of a redesign effort triggered by an overhaul of the UI to try and look a bit less "bootstrap-y" and a bit more professional. Yes, it is kind of strange that a UI reboot allowed me to restructure a lot of the backend code, but since I was already spending a lot of time writing code, it seemed to make sense. As a result, KillrVideo is now a lot more modular, using more of a SOA approach (or microservices if you prefer, since that's the new hotness).

If you take a look at the code now, you'll notice that the web app is composed of a bunch of logically independent services. Each service is responsible for a different business capability or feature of the site. I'm a big fan of Event-driven architectures to achieve loose coupling and scalability, so much of the interaction between services happens as a result of events (messages) published on Azure Service Bus.

For simplicity's sake and to make it easier for developers to run the demo locally, there are only two physical units of deployment: the web app (running as an Azure Web Role), and a background worker (running as an Azure Worker Role). Each of those physical endpoints is composed of multiple logical services running in-process together. I realize that some people may disagree with me characterizing this as a microservices architecture because the services are not independently hosted/deployed.

To me the physical process boundry is not as important as the services being autonomous and the idea that the services be independently deployable (as opposed to deployed). I've tried to structure the solution's code in a way that indicates how trivial it would be to break any of these services out into their own separate physically deployed unit (i.e. Azure Worker Role). The architecture should (and will) get its own blog post at some point in the future, but until then, I highly recommend watching Udi Dahan's keynote from µCon 2014 for more thoughts on the subject.

Speaking of the code structure, once you've cloned the repository and opened the solution in Visual Studio, I'm hoping that things will be pretty straightforward. 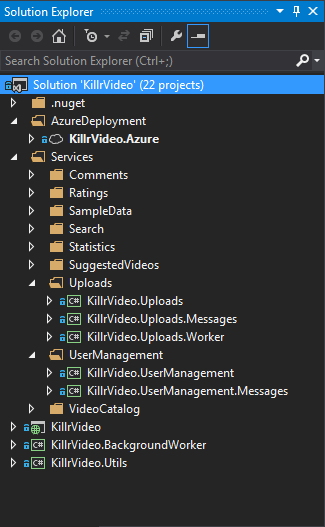 The projects in the solution can really be put into three main categories: top-level projects, services, and utility/deployment projects.

These are the actual applications that get deployed. There are two projects that fall under this category:

Any of the projects under the Services folder in the solution fall under this category, with each service getting its own sub-folder. Each service tends to have up to 3 projects associated with it. The top-level one (for example KillrVideo.Uploads) contains the service's API for consumption by applications like the web app. You'll see the web app making calls to these projects.

The .Messages projects (for example KillrVideo.Uploads.Messages) contain the events published by that service. Like I mentioned in the architecture section above, services are loosely-coupled and interactions between services are driven by reacting to events published by other services. For example, the VideoCatalog service reacts to the UploadedVideoPublished event from the Uploads service to add an uploaded video to its catalog when the video is published and ready for viewing.

Lastly, the .Worker projects (for example KillrVideo.Uploads.Worker) contain the event handlers for reacting to events and any other backend processing code that a service needs to function. The code from the various worker projects is composed and deployed in a single physical background worker (the KillrVideo.BackgroundWorker worker role). But these could easily be converted into Azure Worker Roles of their own and deployed separately.

The category pretty much describes the two projects here:

My original plan to do a riveting series of short films detailing the daily struggles of building your first .NET application on Cassandra fell through due to budget constraints. (Apparently my insistence that only Ken Burns could do such a weighty topic any justice doesn't really jibe with the reality of a startup company budget.) As a result, I've come up with an outline for a regular (and hopefully long-running) series of blog posts on the subject.

I hope to cover things like data modeling, prepared statements, LINQ, lightweight transactions, user-defined types, microservices, CORS-enabled uploads to Azure, and more, all through the lens of KillrVideo. If you're interested, you'll find them under the killrvideo tag here on my blog as they become available.

Intro to Python and Cassandra Presentation on Windows

Developing with Cassandra on Windows

Luke is an engineer, soccer fan, political junkie, and lover of all nerdery. He's currently employed as a Technical Evangelist at DataStax where he frequently works with Cassandra, .NET, and Node.js.